You’d be forgiven for not knowing about the Scottish Cafe; firstly it’s tucked beneath the Royal Scottish Academy and the Scottish National Gallery so as Edinburgh kinsfolk we tend to avoid this area due to the swathes of tourists and swarms of students who don’t have any concept of personal space or manners. Secondly, do we as a city tend to avoid tourist traps, even if subconsciously, for fear of disappointment? Yes, I think we do.

The Scottish Cafe & Restaurant invited us down, new baby and all, for lunch* and I was intrigued to find out if they’d be resting on their tourist custom laurels. Spoiler: they don’t.

Run by Victor & Carina Contini, you may be more familiar with their namesake restaurant Contini on George Street, the Scottish Cafe & Restaurant focuses on Scottish dishes with locally sourced ingredients and food with provenance.

We went along on a busy Sunday afternoon and were seated in the middle of the restaurant with a view out to Princes Street Gardens. From this vantage point, I had the opportunity to observe the staff – when you’re invited to review a place there’s always a little cynic at the back of my brain wondering if we’re being treated more favourably because they know it’s going to get put out on the internet for all the world and sundry to see. I like to observe the staff dealing with other customers to get a real feel for a place and a few things really struck me about the Scottish Cafe – all of the staff were smiling genuinely when serving people and the manager was very hands on and was helping his team, as a good manager should. I’m not going to bang on about that visit to the Dome forever, but this is another prime example of how a City Centre restaurant could be and should be run.

Of course you’ll be wondering what we ate; if you follow me on Instagram you’ll have seen some of the snippets I’ve shared of the delights we sampled on our visit but here’s a quick run through.

We ordered a main course each, they have a good value lunch offer of two courses for £20 or three for £25 but looking at other tables’ wares the portion sizes were pretty decent. As we’d been invited to review, the kitchen wanted to showcase their sharing platter so we were brought out a sample of the Scottish Collection platter.

Normally double the size of this and served with fresh bread, the platter might seem pricey at £33 but the half-sized one was almost big enough for the two of us as it was! It does also showcase some of the best of Scottish suppliers with all the produce having been sources in Scotland. The homemade oatcakes and Highland crackers were the perfect accompaniment to the ham, pastrami, brie, crowdie, salmon and pickles served up! 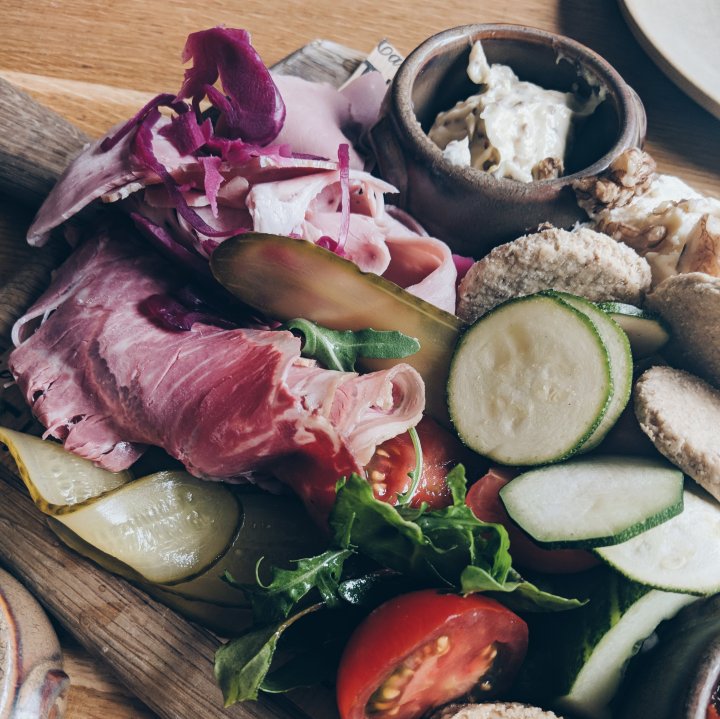 My boyfriend was unsurprisingly daunted then when his actual main course came out – I’ve not quite managed to get his appetite to catch up with mine even after all these years together.

He had chosen the Sunday roast, which happened to be pork – his favourite!

Thus far we haven’t found Edinburgh’s Sunday Roast game to be as strong as Brighton’s but this was the perfect summer Sunday roast. The pork belly literally melted in the mouth, with what I can only describe as a caramelised skin; roast new potatoes were a welcome addition to the plate as was the seasonal vegetable accompaniments of spinach, asparagus, fennel, and cherry tomatoes. We were dubious about the inclusion of the tomatoes but they really worked. I can confirm the Yorkshire pudding was both fluffy and crispy. At £17, it’s at the higher end of the roast scale but for the quality of the food it’s worth it.

I asked our (lovely) waitress for her recommendation for my main course and her response was “it depends on how hungry you are” – a girl after my own heart! I replied that I hadn’t had any breakfast and that I was “pretty hungry” so she recommended the traditional dish of cullen skink. Despite looking simple (and I think the Scottish Cafe has done a really good job of presenting an unpresentable dish!) the balance of the cream, seasoning and fish is actually hard to get right. I’ve had over seasoned, under seasoned and just downright wrong’uns before. Other than perhaps a slight lack of pepper, this had the balance just right. Even more so, when the potatoes still had a little bit of bite to them rather than being a mass of mush which is often the case with such dishes.

We couldn’t even look at the dessert menu after both of our dishes defeating us following the indulgence of the sharing platter! However, they kindly brought us a plate of petit fours – again to showcase their talents. I’m pleased to announce that we just managed to squeeze these in! 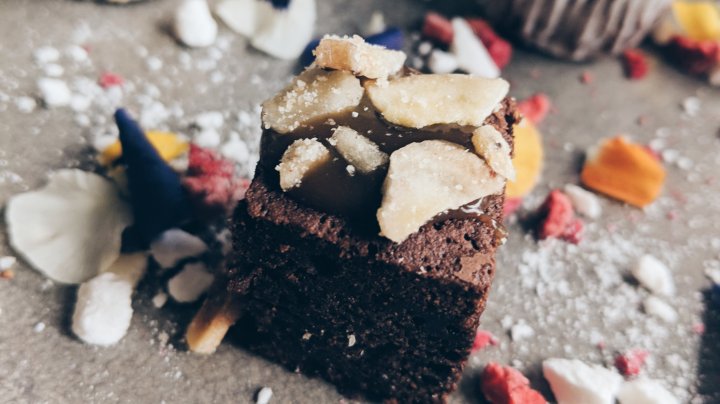 My highlight was the silky chocolate truffles with gooey centres. My boyfriend bagged the shortbread with lemon curd and strawberry which was his favourite of the selection.

We had a really lovely afternoon at the Scottish Cafe, including being made to feel welcome with a colicky baby whose occasional screams were absorbed into the hum of a busy restaurant!

The Scottish Cafe can rest on its tourist custom laurels, but I’m pleased to say that it doesn’t and it’s doing the Edinburgh food scene proud by proudlt serving up delicious Scottish produce and dishes to tourists and locals alike.

Also, how ‘grammable is their food?!

* We received this meal complimentary, but as always, all words, thoughts, compliments and pictures are entirely my own.