I’m an Eastie, through and through; always have been, always will be. However, the Glasgow food scene is something to not only be admired from afar so on a recent (rainy of course) day in Glasgow I hit up some of my Westie Insta pals for recommendations.

One I’d already spied through the powers of the internet and received several recommendations to try out was the new Bibimbap on West Nile Street (very central for those of you not in the know) so I was easily swayed for a little date day with my boyfriend whilst we were dog free.

Being a Brightonian at heart, the likes Pompoko, Kokoro, Murasaki Bento and Namul gave me life. Bibimbap appealed to all of my senses and we weren’t disappointed to find this cute little spot.

Super trendy and Instagrammable to boot, Bibimbap opened recently and, according to my reliable Instagram sources, seems to be proving popular.

The narrow restaurant is ceilinged with coloured umbrellas which are sure to brighten anyone’s day. They’ve made the most of the small space they have to work with by really accentuating the height of the building so it’s cosy without being claustrophobic. 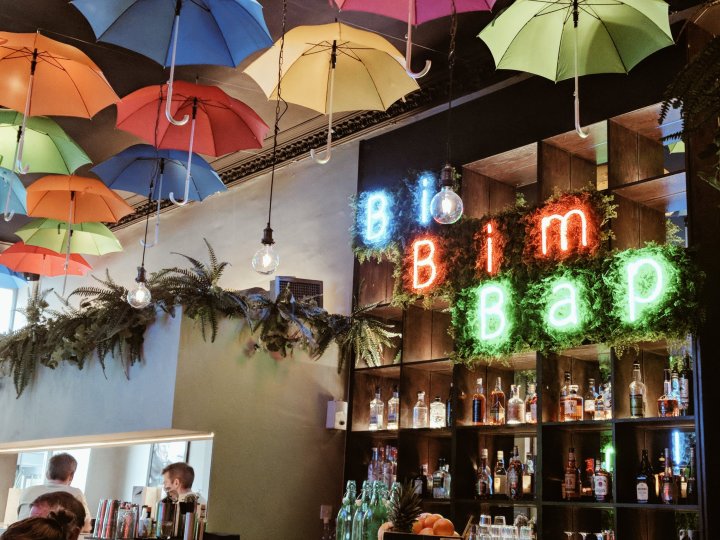 “Bibimbap” in Korean simply means mixed rice, so the majority of the dishes come with rice as a base or recommended with a side of rice.

We went for lunch so we had some pork dumplings to share – kimchi man doo – which were bursting, quite literally, with flavour out of their little cases.

For our main courses, my boyfriend knew as soon as he’d seen the letters K, F and C what he was having – Korean fried chicken! Similar to its Kentucky counterpart, the chicken was plumper, juicier and tastier. It came with a “spicy yum yum sauce” on the side which he did say hot-heeds would be quite disappointed with as it was pretty mellow on spice. He had the fried rice to accompany his chicken and was pleasantly surprised as he’s not a great lover of rice but this was really tasty.

I really wanted to go for the traditional Bi Bim Bap but they only offer this hot stone dish with beef which I’m not fond of. I decided instead to go for the Saeu – prawn katsu.

If in doubt, katsu. You can’t really go wrong. The generous portion was perfect for an indulgent lunch with big juicy prawns in panko, lots of sauce and a large helping of rice. The curry sauce was just the right side of spicy, lots of warmth. It comes with a miso soup on the side too (which I don’t personally like so couldn’t tell you what it’s like!)

The service was good, down to earth.

So, was it worth it? In the immortal words of the Pet Shop Boys, Go West!

One thought on “bibimbap, glasgow, review”