As a rule, I try to avoid chain restaurants when going out for dinner to support locals and independents but sometimes you need a safe option which will cater for everyone and not break the bank. Even more so when steak is involved.

Personally, I’m not a steak fan but I know that you can rack up enormous bills when it comes to scouting out a decent steak dinner. For that reason, when we met up with some steak lovers, we headed to Miller & Carter Steakhouse. Steaks start at £14.95 which, for comparison, is not much more than you’d pay at a Wetherspoons. We went on a Friday night to the City Centre venue on Frederick Street.

So, who are these Miller & Carter figures? From not seeing them anywhere to them popping up everywhere I wondered what their story was. Their website offers no information as to how they’ve sprung up across the country. A little more digging on me ol’ mucker Google and I realise why they’ve not got a success story about how they came to be. From what I can make out, Miller & Carter is owned by Mitchells & Butler – the parent company behind the likes of Toby Carvery, All Bar One and Harvester. Does that change my mind about them? Probably, yes.

Anyway, genealogy aside, how did Miller & Carter fare?

First up, the staff are amazing. The host was friendly, chatty without the conversation being contrived, pointed out where the toilets are (why doesn’t everyone do this?) and ushered us to our table. At our table, we were greeted by our waiter for the evening who was just as welcoming as his colleague and was attentive without being overbearing. He asked if we had been before, when we said we hadn’t he explained how they do steaks – all of their meats are aged for 30 days, they’re served with fries or you can swap to mash or sweet potato fries, you get a ‘wedge’ of iceberg lettuce with a dressing of your choice and they throw a free sauce in along with a grilled tomato and their ‘signature’ onion bread. I’ll come back to that onion bread later.

The setting is ambient, with a bustling open kitchen and a big bell on the wall which you can ring if you want to compliment the chefs, apparently! Warning my photos are crap as the ambient lighting does not a good food blogger make.

The menu isn’t the smallest but nor is it on the scale of its sister company Harvester in the excessive choice. They offer 13 different types of steak, a grill menu, a burger menu, and the “others” – fish and vegetarian options etc. As well as all of that, you have nibbles, starters, sides and desserts. Perhaps quite a lot in hindsight!

To start, two of our party had the baked cheddar mushrooms – button mushrooms in a rich, cheesy, garlicky sauce served with some lovely crispy garlic ciabatta.

My boyfriend and I shared lobster mac n cheese from the sides menu, as a starter. 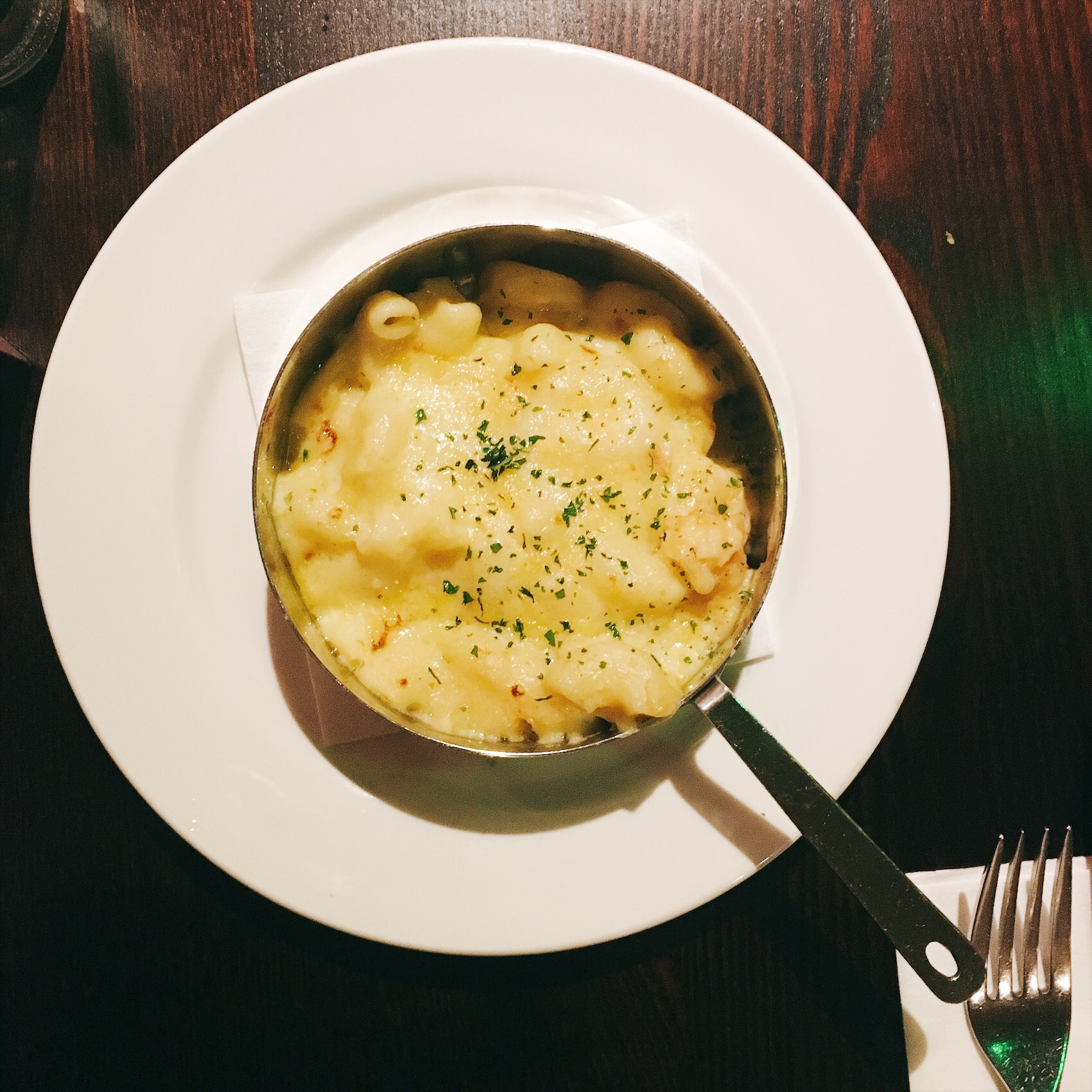 The mac was creamy and cheesy – everything you’d hope for and expect from a mac n cheese but with big chunks of tender lobster laced through the pasta.

The waiter was very knowledgeable about all of the different cuts of beef, making recommendations and suggestions about how to serve them. This can either go down well or not – depending on who they’re telling it to I suppose. But, in this case, he made a recommendation to serve a requested well done fillet medium-well done as there is less fat on the fillet and cooking well done would result in a dry steak. Despite our diner being dubious (and adamant it would be sent back if there was a hint of blood in the middle!) the steak was served as recommended and all of her qualms were appeased and she loved it.

The rump was served medium and was plump and juicy on the inside with some tasty charring on the outside. 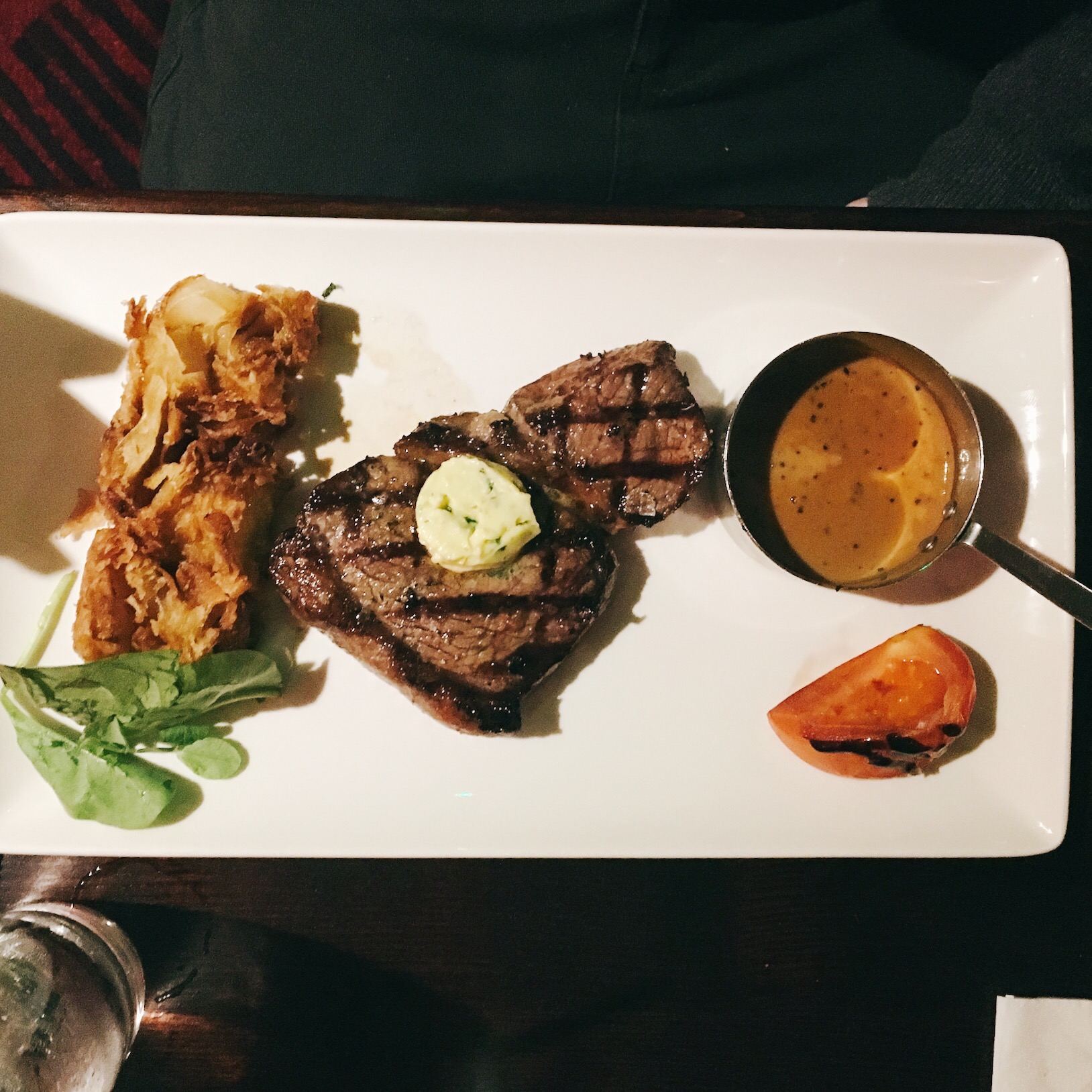 The T-bone was served medium too and the waiter recommended which side of the bone to eat first to allow the other to rest more. I can’t actually remember what he said now but if you want to get yourself 16 ounces of pure meat heaven, I’m sure they’ll tell you too!

The steaks were accompanied by crispy fries, sweet potato fries and rich mash along with the lettuce ‘wedges’ – these are served a few minutes before your main course arrives and we weren’t entirely sure of their purpose. Whilst there was nothing wrong with them – a bit of lettuce with a dressing – we were left wondering how you eat it with your steak? Or before? Or in between bites? Comments were that they would rather have a nice bit of veg on the side instead. 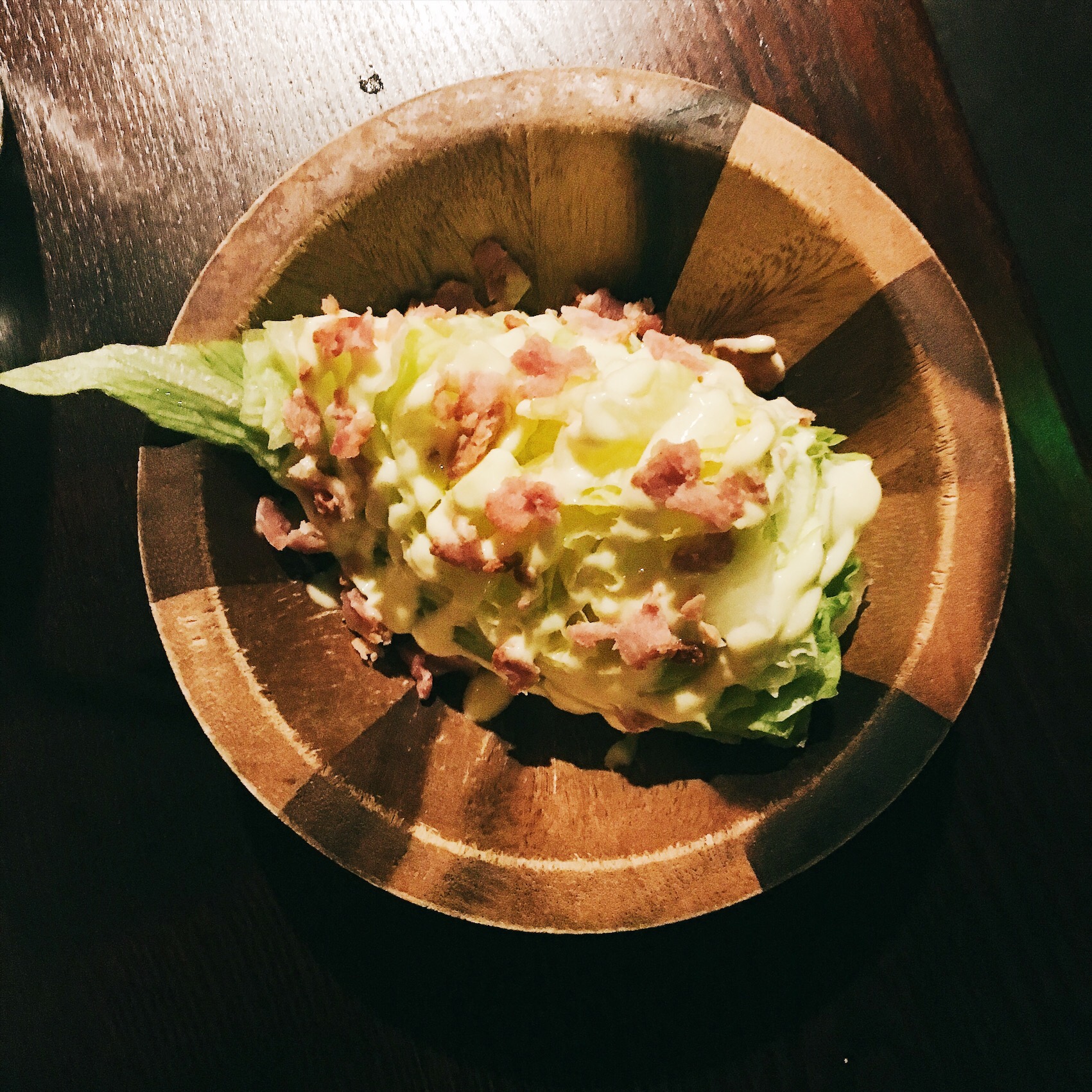 All of the steak eaters were in agreement that the pepper sauce was too strong but that it was nice, in small doses.

The onion bread; when the waiter said this was their signature dish I was dubious, as was everyone else: imagining a meatloaf of sorts but just with onion… Not so in reality – it was a delicious crispy, batter affair which was the food baby of a non-spiced onion bhaji, an onion ring and a hash brown. Sounds delish, right? You’ll need to try it for yourself. 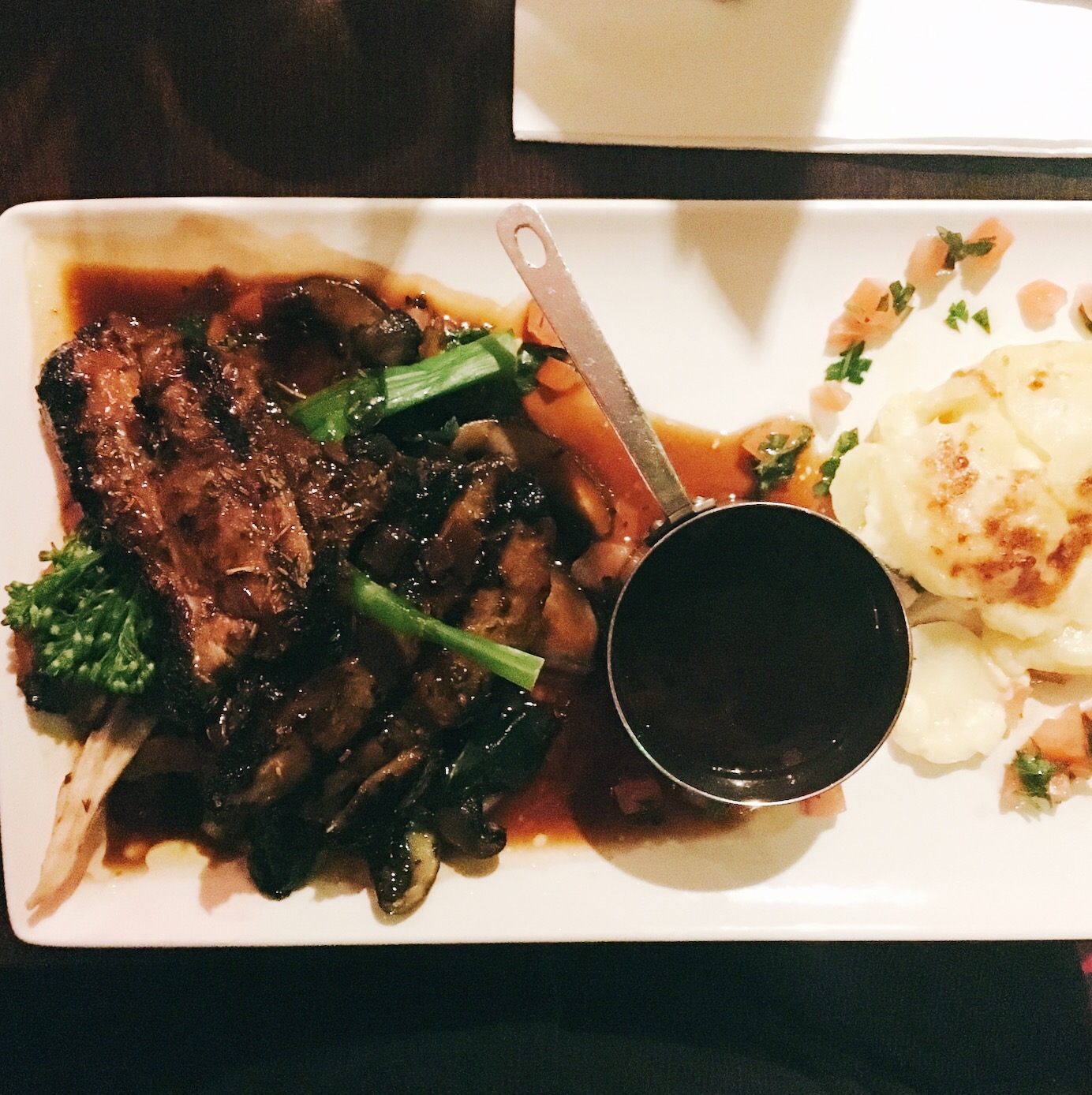 As mentioned, I’m not really a fan of beef and steak is too expensive to eat and not enjoy so I went for the lamp rump. I was so glad I did – herby, tender cuts of lamp (I had three pieces on my plate) served with dauphinoise potatoes, “exotic” mushrooms, tenderstem broccoli and a bordelaise sauce. The lamb was so delicious, I can’t praise it enough and the rich cooking juices from that and the mushrooms meant the sauce was surplus to requirements – being like the world’s richest gravy, I enjoyed it more without. There was a tomato relish of sorts for which they need to take Coco Chanel’s advice – always take off the last thing you put on. There was absolutely no need for it and it didn’t work with the other ingredients so I spent the first five minutes trying to catch all the wee buggers and eat them first to get them off my plate. Insert laughing face emoji here.

After all of that indulgence, there was no way we could even have contemplated dessert so we sat for a little while to finish our drinks and weren’t in any way hurried or made to feel like we needed to settle up and get out.

In terms of value, it’s really good as the steaks all come with the accompaniments included in the price – which is where the steak restaurants normally sting you charging you a couple of quid for chips and a couple of quid for sauce and it all adds up. For our meal, including one or two drinks each the bill came to £130 for four people. Not bad at all.

Despite now knowing that they’re owned by the Harvester’s mummy and daddy, I’d still go back. The food was so expertly cooked and the staff were excellent so I hope this kind of venture is the future for the parent company.

Have you been to Miller & Carter? What did you think?