Foodilic started on North Street, Brighton and has gone from strength to strength with the opening of a second site on Western Road and a further one in King’s Cross, London.

Both the North Street and Western Road shops have their offerings in the window, there to entice you in. They offer pre-prepared food and salads and also a breakfast menu which is cooked to order. Each day, the menu changes and half an hour before they close they half the price of everything to ensure nothing goes to waste and were doing this before it became cool.

I’ve been there for breakfast before which was disappointing as I had eggs benedict and both my eggs were overcooked so I’ve not been back. However, we were walking along Western Road, trying to decide what to have for dinner, at half past 7 in the evening and I stopped to have a look in the window. The, very friendly, server called us in explaining that everything was half price and to come and see what they had left.

She was so passionate that we didn’t feel like cheap skates which was really nice as that’s what has always put me off doing this, I never wanted to be that person who went in and asked if it was 50% off time yet! 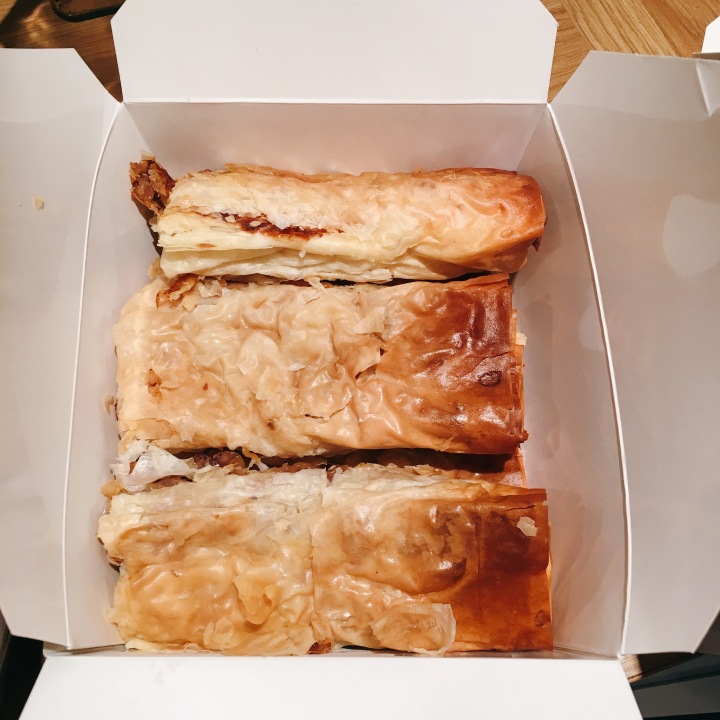 Cheese and bacon feuilletes – tasty cheese and bacon in layers of pastry. What’s not to like? I asked for one and she gave me five. If the boss is reading this, this was the best marketing ploy ever. Firstly, my partner and I had one each, I had one for lunch the following day and took two to work for my colleagues to share. All of them will be coming to visit you in the following weeks. 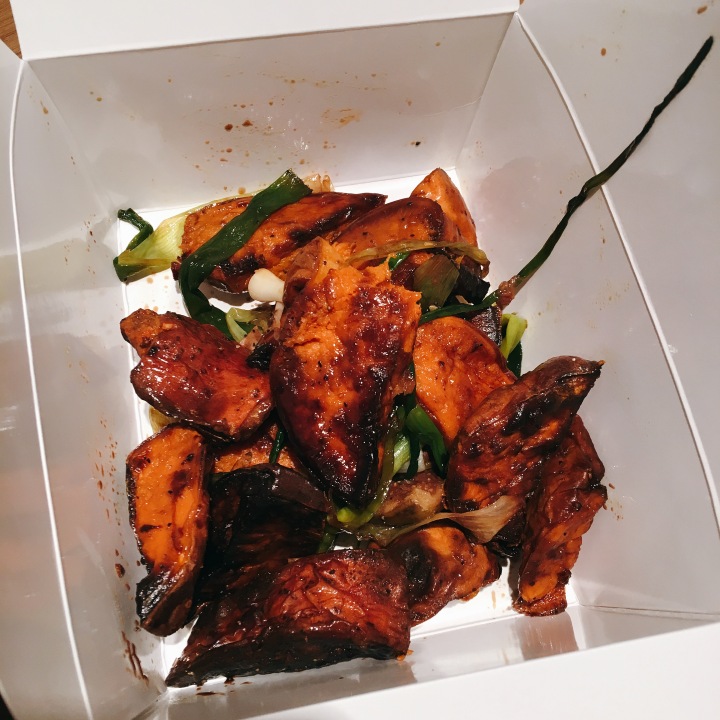 Sweet potato and spring onion salad – the sweet potato was to die for. The picture doesn’t really do it justice but they were really tasty. It looks quite oily in the photo, but it wasn’t as greasy as it looks when we ate it. These salads are paid for by weight – so you can have as much or as little as you like which I think is a great idea. Helps to cut down on waste if you only buy as much as you want / need rather than a forced large portion.

Chicken and bacon kebabs – these were so tasty. Despite the fact that it was the end of the day, they weren’t dried out at all and were still really moist and flavoursome. Again, the photo doesn’t really do them justice but they were made up of big chunks of chicken, wrapped in bacon and herbs with peppers and onions. A quick blast in the microwave when we got home and they were good as new. The boyfriend, who is completely disinterested in food, kept commenting whilst eating them how good they were. For anyone who knows him will know this is a big deal!

I had my kebab and sweet potato salad with some homemade pesto mayo – it was really filling.

The two kebabs, box of sweet potato and five pastries came to … drum roll please … £7.22. Now, if that isn’t a bargain, I don’t know what is. Even if I’d have paid £14.44 for this I would have been happy – it was really flavoursome and the staff are obviously passionate about what they do.

I think I need to make a return visit to try their breakfast again – fingers crossed I get a runny yolk this time!