The traditional Greek taverna, Archipelagos is a stalwart of the Brighton & Hove food scene.

It’s one of those ones that people might bypass (I have lived here for nearly 9 years and this was my first time) but once you’ve been you will keep going back.

We attended on a sunny early Friday evening and the place was packed inside and out. They advertise themselves as traditional, and traditional it is – the owner is on the floor at all times, assisted by several other guys and no young waitresses. They shout over the tables to each other, nearly always in Greek; this gives you the feeling of being on holiday and you feel like you could be a thousand miles away. We went on holiday to Rhodes a few years ago and everywhere we went was just like this so it really gives a good ambiance.

To the food: oh, the food. Let’s round them up, dish by dish. 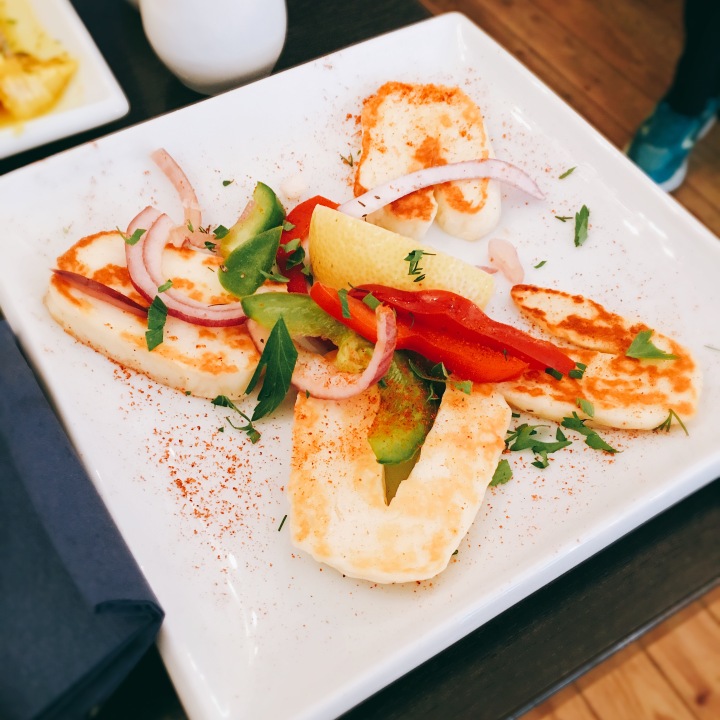 This was everything you want from halloumi: meaty, salty and charred on the outside with a touch of goo in the middle and just a hint of squeak. Served with a light salad and a dusting of (paprika?) It was very good quality and tasted way better than your average supermarket halloumi. 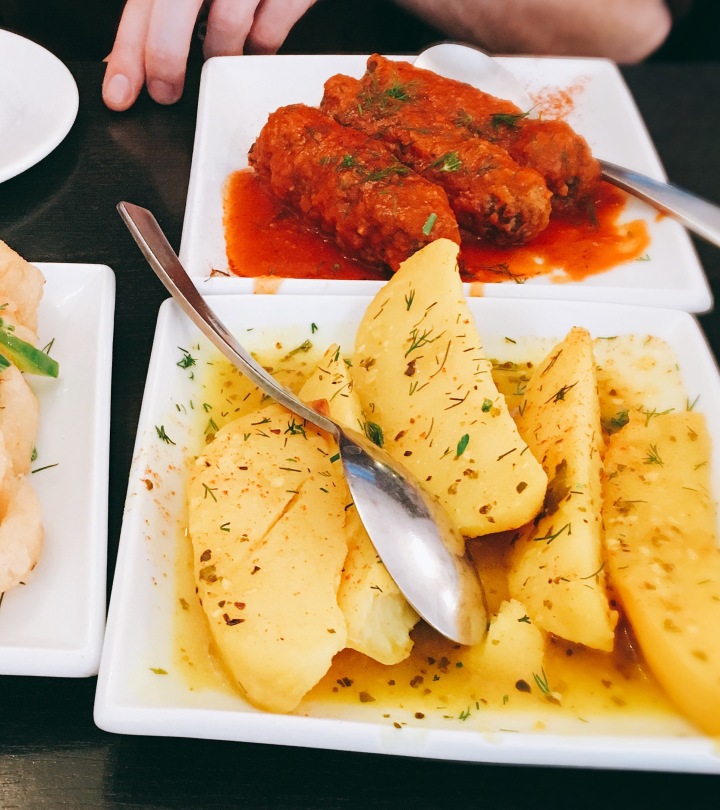 BACK ‘Soutzoukakia’ – meatballs in tomato sauce

These were so, so good. Looking around, I think these are the go-to dish for everyone eating meze style. The meatballs (which are more kofta shaped) were cooked and seasoned perfectly, as was rich tomato sauce. No complaints whatsoever.

This was the only dish we were underwhelmed with – not because there was anything wrong with it but that it just wasn’t as good as the other dishes. That said,’tatoes are ‘tatoes at the end of the day. The sauce was nice, the potatoes didn’t really taste roasted but I quite enjoyed them as a filler with all of our other dishes and they were not overcooked or slimy in any way so bonus points for that. Would opt for the spicy tomato option next time. 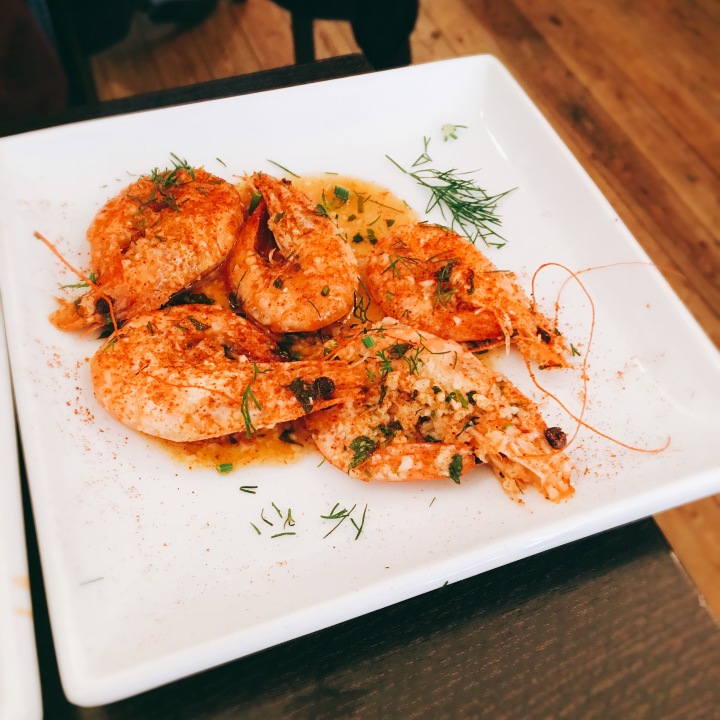 Five, decent sized, prawns with the shells still on in a chilli dressing with a bit of heat behind it (but not too much). These were slightly overcooked which made the shells difficult to get off some of them. However, quality again was evident they were meaty and flavoursome. Finger bowl also provided immediately (I hate it when restaurants take ten minutes to bring it out, I wanna get stuck in there immediately, cheers). 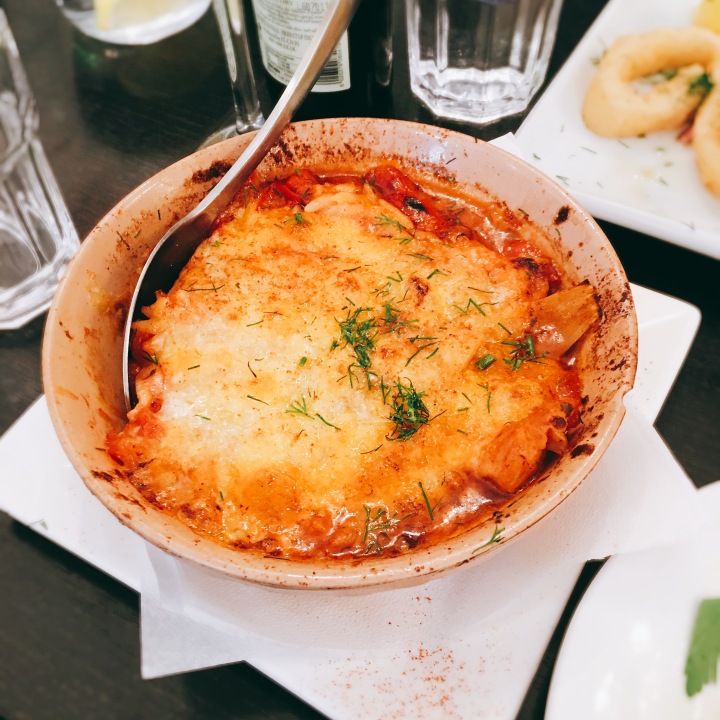 Oh cheesy, chickeny, pasta heaven. Big chunks of perfectly cooked chicken breast in a bed of orzo pasta with tomato sauce and juicy peppers and topped with, a lot of, cheddar cheese.

This was one of my top dishes – when the boyfriend had given up after one large spoonful because he was full, I couldn’t bear to leave any so I ate the rest of it by myself. When we went here, it was my first day after completing Whole30 and this was everything I wanted and needed. Going to attempt this one at home for sure. 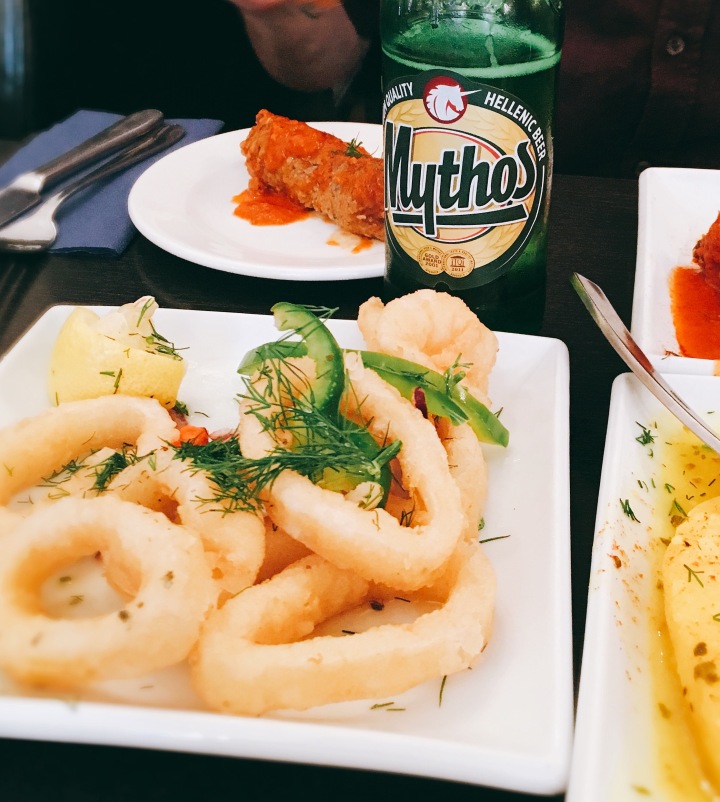 Saving the best ’til last here. We opted for the imported squid rings, purely based on a cost decision – they also offer local ones for £2.00 more. There were about 8-10 squid rings which, for £5.95, is absolutely blinding good value. These were fresh, light, not chewy and the batter was sublime. They were salted perfectly – we did not need to add any more nor did we feel there was too much salt as you often find with fried squid in the UK.

I have this thing, for every meal I eat where possible, to save the best thing ’til last (i.e. eating all the crusts off all my sandwiches first then checking both halves to see which has more filling and eating that last, weird I know) and so I knew as soon as I tried these that I would have to save one until the very end. This is a risky strategy with squid as, for the most part, you need to eat it straight out the fryer and the longer you leave it the more rubbery it gets. Not here, folks, not here. The last one was almost as good as the first one – testament to the quality. Sublime. 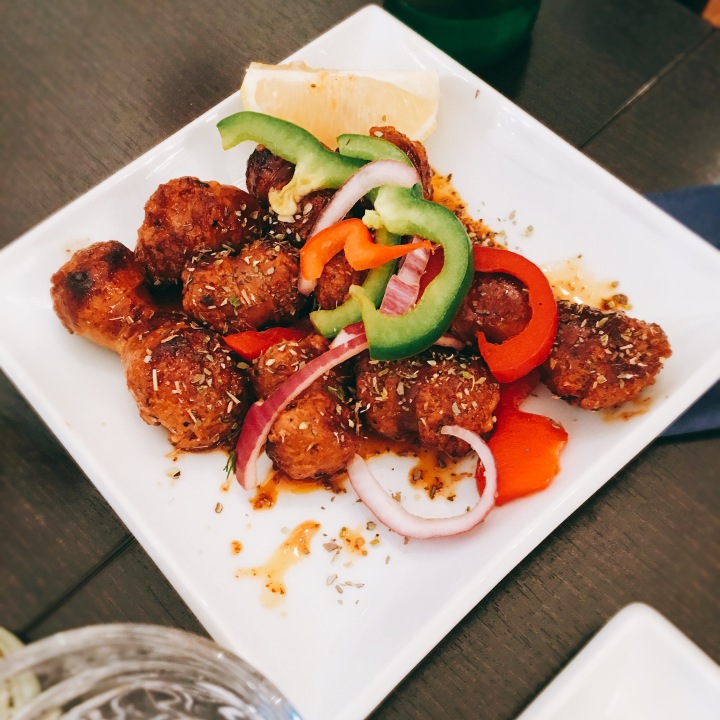 Whilst the squid was amazing, this was, hands down, our favourite dish. Pork sausages, seeped in wine and grilled.

Back home, I love a ‘king rib supper’ which nobody has ever heard of in England. This wine sausage is a pimped version of a chippy king rib and I couldn’t get enough of it. Nor could we fault it in any way.

Now I know how to source ‘king rib’ in this country, I’m’a guna be all over it like a rash.

I think it’s safe to say we really enjoyed our meal: the food, the atmosphere, the service and the price. For all of this, plus one beer and a small bottle of prosecco it came to £53 including service. Winner. Naturally, we left a tip on top of the service. Recommendation: book in advance, it’s so popular you are unlikely to get an evening table at the last minute. We booked four days ahead and I was only given the option of a 6.30 or 8.30 sitting.

Have you been to Archipelagos? I saw the Kleftiko come out for another diner and it looked amazing so I will definitely have to go back! What else can you recommend?